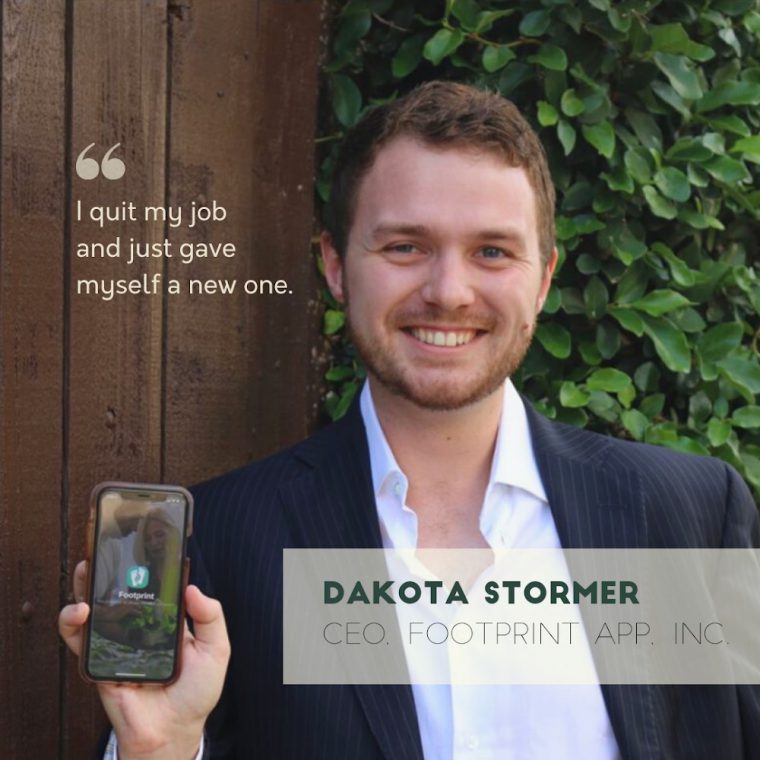 The stories of the most successful entrepreneurs inspire us. It is probably the dream of many to emulate the lives of these individuals, but few dare to leave a stable job behind to  pursue the journey of becoming one. UNLEASH Talent, Dakota Stormer, recently encountered this phase in his life and made a decision.

During a camp on a beach in Galveston at seven years old, Dakota recalls a tropical storm forming off of the coast and blowing into the island during the night. By morning, the storm had affected their camping tents, leaving them afraid and evacuating the beach. “At that time, I became interested in knowing what caused weather and climate events”. With the surname of ‘Stormer,’ he later thought that might make a beautiful career.

Later in high school, Dakota spent most of his time reading blogs, researching and learning about climate change. He went on to work on numerous education projects with the school district, teaching students about climate change, energy efficiency, and recycling. During college, Dakota studied chemical engineering and specialized in alternative energy and environmental engineering, hoping to work in clean energy and help reduce emissions.

After college, Dakota realized that contrary to his assumptions, it was challenging to find a job in renewable energy. In Texas, where he grew up and studied, there are massive oil and gas operations. In fact, across the United States, Texas is the biggest fossil fuel producer. According to the State’s Oil and Gas Association, Texas “accounts for 41% of crude oil production, 25% of natural gas, and 31% refining capacity”.

As he continued his job search, he found Shell – a global group of energy and petrochemical companies exploring and producing energy products ranging from fuels, oil, natural gas and lubricants in the United States. For nearly four years, Dakota worked in roles from technical safety engineering, completing deepwater projects, to joining the company’s group carbon practice. In this role, he also became the President of an employee organization of about 6,000 members who cared about climate change and worked internally to reduce carbon emissions. Dakota also ended up  running an internal incubator called Project Grassroots, sourcing and developing ideas internally and supporting grassroots engagements for climate action.

But throughout his journey, an inkling in his heart persisted, to figure out how to expand strategies related to clean energy and help transition organizations to more sustainable alternatives. It was during this period that he founded Footprint App. As the company began growing, he soon realized that its potential impact lay in its ability to help employees at other companies collectively address climate change.

Dakota was selected to join UNLEASH’s first cohort in Singapore in 2018. As the founder of a newly launched climate-focused company, Dakota admits that the program helped him significantly during his early days. “UNLEASH helped me figure out how to prepare a pitch deck and get it together. It inspired me to go after something of such on my own.”

Dakota’s Footprint App is a software for climate education and actions, serving naturally forming groups – companies and learning institutions. Nearly three years after launching, the company’s growth rate was fast increasing. Students and employees sought ways to impact climate change, and Footprint provided an opportunity that facilitated collective actions to help people build a community around an issue they care about.

The “blessings” of the pandemic

As the pandemic ravaged the world in 2020 and physical convenings were shut down, Footprint as a virtual engagement tool for climate action allowed people to learn and track their impact on climate change. “It was easy to see the impact of working from home on the climate. It reduces your footprint, but also facilitates collective actions for climate change”.

During this period, the team conducted customer interviews, and customers flagged the need for a web-based platform due to security concerns and limited or lack of access to smartphones. By late 2020, Dakota and his team launched an enterprise software version of the Footprint App. About one month following the launch, the company closed its first major corporate customer, a large waste management company in Europe with approximately 10,000 employees.

The enterprise version helps companies calculate, quantify and reduce their impact on the climate through employee engagement. The large corporate customer requested Footprint to work with the company to measure their employees’ emissions and engage them in climate actions that help reduce its overall impact on the environment.

As a result of the company’s growth and impact, investors drew interest in the company. Subsequently, Footprint App closed an initial investment of about $175,000 led by the Founder of Chargepoint, Richard Lowenthal. This brought Dakota to make a critical decision: quit his job with Shell and join his 12-person team to pursue Footprint App as a full-time entrepreneur and employee.

The now and the future

Dakota and his team are currently working on numerous projects and growth opportunities. One of the current initiatives is serving on the climate planning committee for the City of Houston. They’re working on a corporate climate change initiative that seeks to help over 20 companies working collaboratively to take actions on climate change.

The company recently closed a major project with the Suez Group and will collaborate with bp and IBM on numerous projects this year.

After raising about $175,000 of their $800,000 initial investment target, the company is moving into their next phase of completing its investment round and expanding its customer base. With additional investment, Dakota plans to incentivize his sales team, hire a full-time team to deliver excellently on their work, and further strengthen their capacity.

Through their projects with corporate and institutional partners, Footprint App engages with nearly a million individuals on climate actions, with a potential to further scale. The carbon impact potential lies at about a 20% reduction in carbon footprint, about 3 tons per person.

As Dakota reflects on the company’s future, he hopes the company’s cultural transformation tools will bring climate action into the hands of every employee and student.

Learn more about Footprint App on their website, and get in touch with Dakota here.